3rd July 2019: this is a piece that I wrote recently for Daizo Tokuda and Shinko Music Japan. It was written to accompany the companion piece written by Mark Reynolds and myself regarding the history of Brian May’s treble boosters and pedalboard used with ‘Queen’ from 1970 until around 1986. Since then I have edited the text and added more info and photos. Hope you enjoy reading it. Cheers, Greg

[More photos to be added soon]

1997-98: the first Greg Fryer treble booster pedals were handmade for Brian May and used by Brian to record the ‘Another World’ album at Allerton Hill studio in 1998. These treble boosters pictured below were made in a plain aluminium box with the yellow ‘Fryer’ logo decal, which was the same waterslide decal used on the 3 Fryer Red Special guitars ‘John, ‘Paul’ and ‘George Burns’. 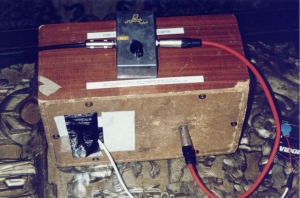 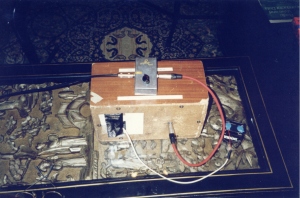 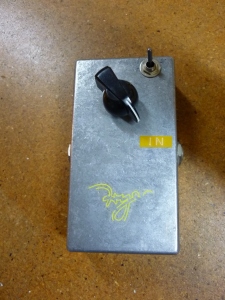 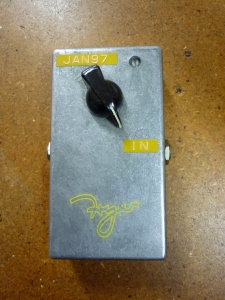 Some of these early treble boosters featured a black pointer knob to adjust Level, and some were made with no level control and used the slide in-out Bulgin battery box for easy replacement of the 9V battery. Brian May used the treble booster featuring a battery box on his pedalboard for his 1998 World Tour. The battery box treble boosters (one pictured below) were the forerunner for the Treble Booster Touring pedals handmade by Greg Fryer from 2001. 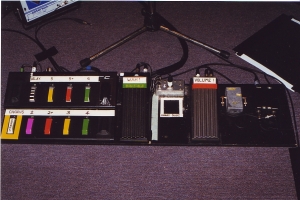 1999-2007: Brian May/Fryer Treble Booster (standard) screenprinted and featuring a black pointer knob to set level. Handmade by Greg Fryer and made in various colours from 1999-2006 and same circuit as Treble Booster Touring. No battery box. 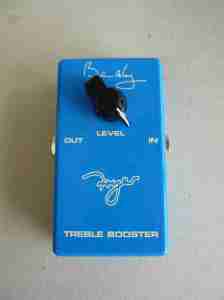 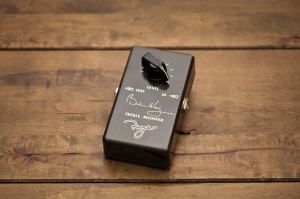 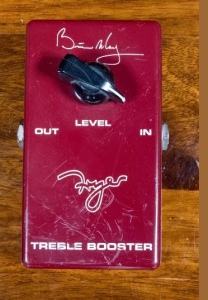 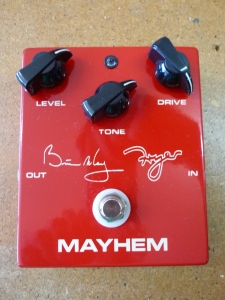 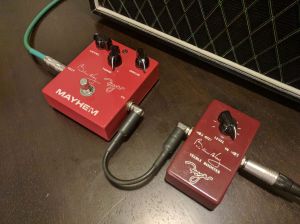 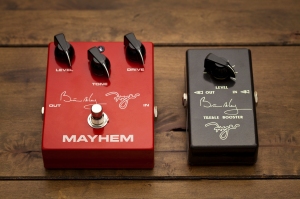 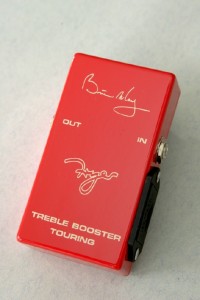 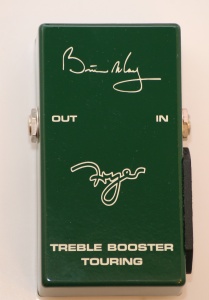 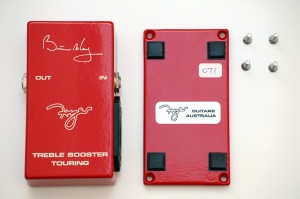 3 photos above courtesy of Mike Ryde

2006: a small number of strap mounted treble boosters handmade by Greg Fryer, made for Brian May’s live use with Queen + Paul Rodgers tours. A few of these were also made for customers including Mike Ryde who has kindly supplied 2 photos of his equipment below. Made in black colour and same circuit as Treble Booster Touring. 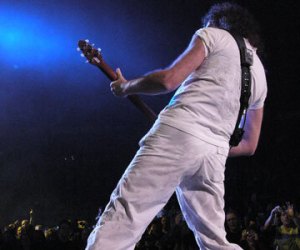 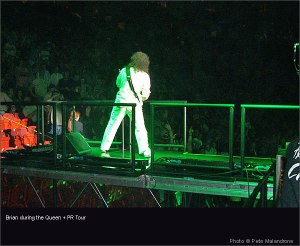 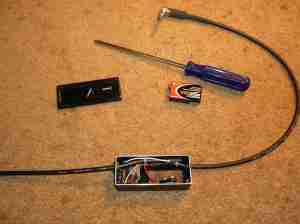 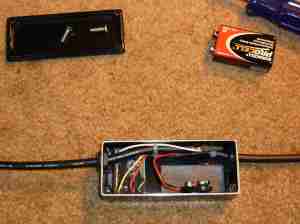 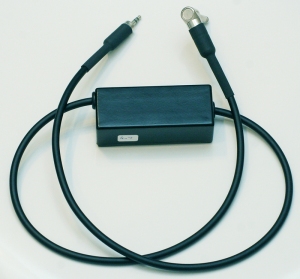 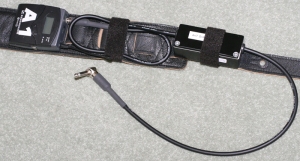 The 2 photos above are courtesy of Mike Ryde

[Footnote: Since around 2014 Brian May has been using the Nigel Knight (KAT) made strap mounted boosters for his live performances.]

2008-18: UK factory made versions of Brian May/Fryer pedals: Treble Booster Touring, Treble Booster Deluxe, and Treble Booster Plus pedals. These Greg Fryer design pedals were produced by ‘Fryer Sound Ltd’ which was a partnership between Greg Fryer and Nigel Knight who now produces the KAT products. 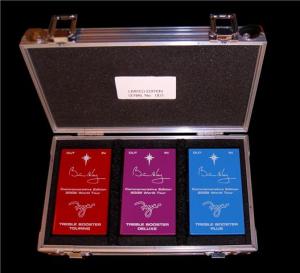 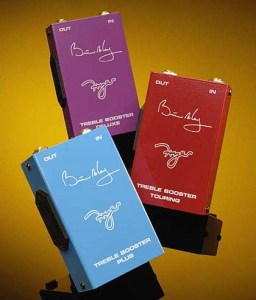 2015: Mayday overdrive/distortion pedal developed and handmade by Greg Fryer. To be used with any of the Fryer treble boosters driving it first in line.

2015: Treble Booster Special black colour box made in Spain by Roberto Garcia (Thundertomate pedals) for Greg Fryer. (no pics available of this one or have I??)

A new combined treble booster and distortion pedal under development, and prototypes are expected to be due for testing and soundfiles in November 2019: this is a ‘Brian May-in-a-box’ sounding pedal designed to be perfect for low volume home use so people can get a great sounding Brian May overdriven full volume Vox AC30 sound using almost any guitar and amp combination.

This new pedal is being developed to be a combination of the Fryer Treble Booster Special and a redesigned extended Mayday distortion circuit which features more intense Vox AC30 and Deacy Amp distortion sounds.

Product description and explanation of the sound of the 2019 Greg Fryer pedals:

Treble Booster Touring: same Greg Fryer pedal that Brian May has used from 1998 for recording and live use. Moderate gain of 31db. Highest amount of treble content of any of the Fryer Brian May style treble boosters. Gives the Brian May recorded sound of mid 1980s,

Treble Booster Super: developed in 2014 to be closest sounding modern treble booster to the BC149 booster that Brian May used from 1974-1977 live and on albums such as Sheer Heart Attack, Night At The Opera, Day At The Races. Powerful output at approx 34.5db and balanced amount of treble and bottom end content. More fatness and richness of sound than the Treble Booster Touring pedal. “Creamy fat and crispy”.

Treble Booster Deluxe: new version developed in 2014 to give improved sound from the  2008 BM/Fryer TB Deluxe. Slightly more output compared to the TB Super and a fatter richer sound again. 35db gain. Designed to evoke the fatter Brian May recorded and live sound of the late 1970s heard on Queen albums ‘New Of The World’, ‘Jazz’ and  the live sound of 1979’s ‘Live Killers’.

Treble Booster Plus: (Discontinued in 2019. Produced an even fatter sound than TB Deluxe with less treble content. Powerful output level of 36db gain.)

Treble Booster Special: uses the same transistor as the Treble Booster Super which produces a rich, crispy and powerful sound. This pedal gives the sounds of 3 of the Fryer Treble Boosters: Super, Deluxe and Plus, plus 3 extra sounds which are both thinner and fatter.

Range control has 6 positions on its rotary switch and each position selects a different input capacitor which gives a range from thinner to fatter sounds.

Mayday overdrive/distortion pedal: requires a treble booster to drive it first in line and gives the full volume overdriven Vox AC30 Brian May sound but at much lower overall volume levels. It is especially good for achieving the full volume harmonically rich sound at low practice levels or home levels.

The Mayday pedal has been designed to sound good driven first in line by the Greg Fryer treble boosters: TB Touring, TB Super, TB Deluxe, TB Plus and TB Special; as well as other brands of treble boosters such as Kat and Pete Cornish.

Powered by 9V Adaptor with no battery option.